What is alcoholism? How does it affect us? Not aware of it, many of us know someone, if not ourselves, who is an alcoholic. Alcoholism is the habitual excessive consumption of alcohol (NIAAA). It is a chronic disease that is often times progressive and fatal. This means that the disease continues over time and that physical, psychological, and emotional changes often occur. These changes cumulate and progress as the drinking continues. Denial becomes an essential part of the disease and a major barrier. Alcoholics often drink to help their problems, but rather, drinking and denial are a major cause of the problems.

Alcoholism is frequently not perceived as being a disease, which are involuntary disabilities. Like other diseases that we canвЂ™t manage, alcoholism impairs our control also. Alcoholics donвЂ™t have the ability to limit their alcohol use, the quantity consumed, or the consequences in their behavior from drinking (a-a.com). Not only does consuming alcohol affect our behavior, it impairs our physical health, and interpersonal and occupational functioning (NIAAA).

Alcohol affects the body in two ways. The first affect is coming in contact with mouth linings, esophagus, stomach, and intestine. This is where it acts as an annoyance and an anesthesia. The second affect alcohol has on our bodies is that only 20% of the ingested alcohol is absorbed through the stomach, the other 80% is absorbed through the intestinal linings, reaching every cell in the body (a-a.com). 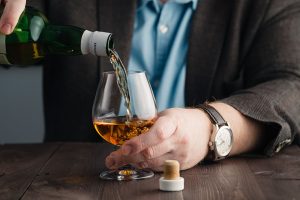 A few of the most common consequences related to consuming alcohol involving the way we think, are automobile accidents, DUI, and DWI. Often times the ones affected most in automobile accidents involving drunk drivers are the people smart enough not to drink and drive. Not only does alcohol affect our bodily functions, it affects our emotions. If a woman is pregnant and she consumes alcohol during her pregnancy, it can affect the fetus, causing Fetal Alcohol Syndrome. It has also been proven that women who drink may have more miscarriages, smaller babies, and more behavioral difficulties in the child.

With this little research about alcoholism, I have been thinking about my neighbor and close friend, who I will refer to as вЂњJane.вЂќ Jane has three young children and a husband at home to care for and she maintains a part-time job. Recently, since the birth of their three-year-old twin boys, Jane and her husband have been experiencing marital problems.

Jane and my mom are very close friends. They are the sisters neither of them ever had. The two of them always go out together and sit and talk. Jane is like my second mom. But sometimes she likes to drink too much. Jane has always liked to have a few drinks socially, but since these marital problems have started to worsen, so has her drinking. Every Friday she has off work and her and my mother usually go out shopping and to lunch. At lunch she always has to have at least about three drinks. Later in the afternoon she will start drinking again, usually wine. By the end of the day on FridayвЂ™s, Jane usually consumes about 6-12 drinks.

The first thing on JaneвЂ™s mind when she arrives home after work is, вЂњI gotta have a drink.вЂќ Sometimes her drinking leads to pushing her kids away. It also puts more fuel on the fire between her husband and her. JaneвЂ™s husband dislikes the fact greatly that she drinks so much. She embarrasses him at work and friendly functions by getting вЂwasted.вЂ™ He has tried numerous times to get her to stop drinking so much, so often, but nothing works.

After reading about alcoholism and thinking about how stressed Jane is with her family and husband, I think she drinks so often to cover the pain. Since alcohol acts as an anesthetic, my family and I believe she drinks to hide and cover the pain from her marriage and the stress of her children. She drinks too much, too often.
When Jane consumes alcohol, she gets intoxicated and it shows. She likes to вЂhang onвЂ™ people and she often canвЂ™t maintain her balance. Sometimes she even picks up her children from day care after having a few drinks. Someday she might not be so fortunate as to make it home. Alcohol also affects her temper. Jane gets angry and sometimes very demanding when drinking.

Even though Jane is a very close family friend, I am concerned for her well-being and the well-being and safety of her children. My family has approached her several times about drinking too much, but Jane doesnвЂ™t see anything wrong with what she is doing. My mother has talked to Jane alone to help her stop drinking so much, especially as often as she does. Often she doesnвЂ™t answer and avoids the topic. Although she has continued to drink frequently, alcohol never comes in the way of getting her children fed and ready for bed. She has also never missed a day of work because of alcohol.

My family and I believe that JaneвЂ™s family problems and stress contributed to her increase in drinking. Although these things may have caused the increase, she herself has chosen to drink this much. There is a difference between being a drunk, and being an alcoholic. Drunks drink to get drunk. Alcoholics drink because they want to and feel they have to. Jane has her mind set now that she needs alcohol, and has to have a drink all of the time. She will not admit to being an alcoholic, but I believe she is suffering from alcoholism.
So how do you know if someone or you are suffering from alcoholism? Many organizations have websites with helpful information, symptoms, and quizzes. The Alcoholics Anonymous homepage has 20 questions that determine whether or not you or someone you know is an alcoholic. You may also talk to a physician about your problems.

To ensure that I was not just assuming that Jane is an alcoholic, I went to the Alcoholics Anonymous website and applied the 20 questions to her. Three of them fit her, meaning she is an alcoholic. Not only did I look at the 20 questions, I thought about how often she drinks, why she drinks, and how much she drinks. Jane always wants a drink after work. That is a definite sign of alcoholism, craving a drink at the same time daily (a-a.com).

Alcoholism is a serious disease that can be fatal. It is progressive, and can often be compared to quicksand, once you get in it, itвЂ™s very hard to get out. Frequently people do not realize that it is deadly and the serious affects it has on our bodies.

Haven't Found The Essay You Want?

Get your custom essay

Would you like to get a custom essay? How about receiving a customized one?